Professional PAT Testing Training Courses delivered at organisations around England and Wales.  Keeping you and your employees safe is our top priority.

Option 1 – we come to your premises

Our instructors will come to your premises and deliver our popular PAT Testing Training Course to you and your staff.  As well as learning everything there is to know about electrical equipment safety in the workplace, it also allows us to personalise the course based on the electrical equipment you will be testing.

Hands up who doesn’t like asking questions when there are others on the same course?… as I suspected, a number of people.  To help with this, we have been delivering the same PAT Testing Training Course to individuals on a ‘one to one’ basis for some time.  This allows the student to be more relaxed, they can work at their own pace, they are more inclined to ask questions (irrespective of how silly they think the question is) and again, the course can be tailored to suit the individual and the electrical equipment they will be working with. 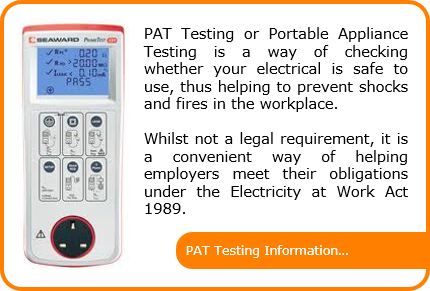 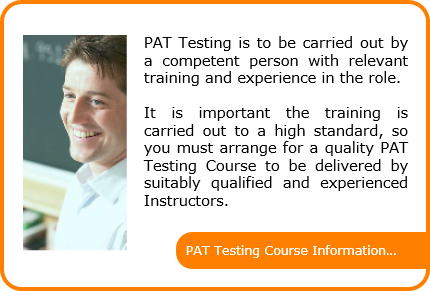 Can I attend a Training Course if I’ve never had any electrical training or experience?

Whilst some people have a level of technical knowledge, the majority have very little.  We assume that everyone knows nothing, and if it turns out that you have some previous knowledge, that is a bonus.  In order to prepare you a little for the course, we ask that you do a little ‘homework’ in the form of a multiple choice online quiz.  This will introduce you to some of the terminology we will be using and give you a push in the right direction.  On top of that you can have your Trainer’s mobile phone number.  If you get stuck at any stage, give him a call and he will talk you through it.  Alternatively you can call our office.  If you think you need more help, why not take our 2 day course instead.

PAT Testing in-house – Do It Yourself

Whilst not a legal requirement, PAT Testing won’t go away. Instead it is evolving and has changed significantly since it was introduced in its current format 25 years ago.  Rather than testing every appliance every 12 months, a risk based approach has been adopted which requires more management and ‘fine tuning’ of the process.  By bringing the task in-house you are able to closely match the testing to your specific requirements, whilst saving on Qualified Contractor costs.

The largest and most important part of testing isn’t the actual testing, but instead it’s the User Check and Formal Visual Inspection.  Typical appliance faults are normally missed by electrically testing the appliance, but are easily spotted by just having a good look at it.  Getting your work colleagues on-board with this concept will save you time and effort, whilst making the workplace a safer place.

For smaller operations e.g. DJs, self-employed construction workers, landlords etc, carrying out your own testing at a time to suit you puts you in the driving seat, without having to pay excessive ‘day rates’ due to your lower numbers of appliances.

How many people do you allow on Courses?

Whilst we prefer a group of 4 people, we normally allow a maximum of 8 people on any of our 1 day courses.  Each person will need a bit of 1-on-1 time at some point in the day, so if the group is too big, this can be a problem.  Should you require more people to attend, we can accommodate that by bringing more Trainers to the course.

Do I get a certificate?

Upon successful completion of the practical session and multiple choice exam you will have earned a Certificate of Achievement, stating your ability to carry out In-Service Inspection and Testing of Electrical Equipment, as defined by the IET Code of Practice (Latest Edition).  These are sent to you via email.

Do I have to complete an examination?

You won’t like to hear this, but yes.  In fact there are two, but the first one is just a practice paper to get you accustomed to the question style.  The second paper is the one which counts. 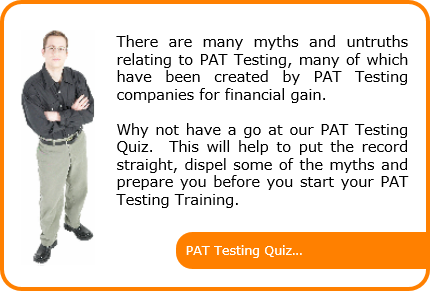 Where do we run courses?

Are you located within 100 miles or 3 hours of Gainsborough, Lincolnshire, DN21 1DY…whichever is greater?  If so, we would be pleased to deliver a PAT Testing Training Course at your premises.  We have recently delivered courses in Newcastle, Carlisle, Leeds, Manchester, Preston, Hull, York, Sheffield, Lincoln, Chester, Leicester, Nottingham, Worksop, Peterborough, Stevenage, Liverpool, Coventry, Birmingham, Cambridge, Luton and Cheltenham.

Alternatively, you could always visit our training centre in Gainsborough, Lincolnshire